On Thursday 17th March, four FTV students attended workshops at BBC Birmingham as part of Digital Cities Week to pick the brains of broadcast industry insiders and participate in practical training with digital tools. In this post, Elena Tang and Yang Zhang reflect on digital storytelling, using new technologies to produce innovative content, and trying their hands at being weather presenters.

We were welcomed to the Mailbox with a 3D goggles show-zone and offered a chance to get immersed in this new interactive way to engage in previously 2D television programmes. After registering, we were led upstairs and through labyrinth-like alleys and finally arrived at the BBC Academy space where the workshops were mainly held. 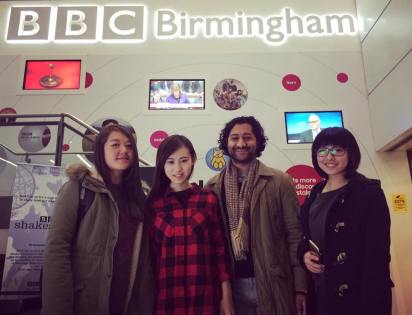 The first session was hosted by writer Elaine Wilson. She explained how digital storytelling is different and what types of stories you can tell online. With the development of technology, the way to tell a story has changed dramatically and it is obvious that many people prefer accessing content through mobile phones, laptops and other electronic devices rather than books and newspapers. Thus, digital platforms play a significant role in filmmaking and television production. After a brief introduction to the core points for a good story, Elaine suggested ways to take full advantage of social media in storytelling. Examples of short form vloggers like ‘MinutePhysics’ were also shown to demonstrate how effectively this type of content works.

We learned that a good character in a story should have a clear goal and motivation, being recognizable while having their own flaws and strengths. Critical elements of a story include consistency and consequence: what happens if the characters succeed or fail. During an activity we were divided into groups of four and given a nursery rhyme to adapt into stories to be told in digital forms. Everyone’s ideas seemed so unique and innovative, and it was great to see that people’s creativity could be ignited through simple inspirations like the owl and the pussy-cat falling in love with each other.

Next, in order to put the idea into practice, we were tasked with making a 10-second short film using Vine in a limited time. We grabbed the chance to make creative videos in small groups, and all videos produced were posted onto the big screen so everyone gets to see what the other groups had made: some hilarious, some very artistic, and many with innovative twists. The fun and relaxed activity helped us learn the art of digital platforms and see how swiftly a piece can be produced.

During the lunch break we explored the BBC Public Space where we were able to try working as an anchor on either a weather forecast, the news or a natural history program. Reading the autocue was quite a challenge, but it was fun to see ourselves on screen on the hunt for polar bears or predicting rain, and we got a better understanding of how a 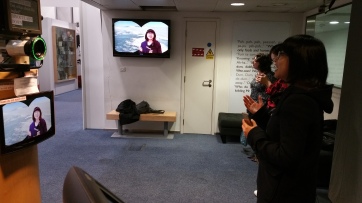 In the afternoon session, we attended different workshops in smaller groups and tried making short form content with infographics, photos and audio using iPad and mobile apps like Splice and Pictophile Pro. We got to experience digital content including Pint-sized Ashes for BBC Radio 5 Live, facilities including green screen, 360º video and VR headset, all within 10 minute workshops.

The intense but fun workshops showed us how interesting and seemingly complex digital content can be produced in a short period of time with limited resources and on a small budget, especially using simple mobile apps. The future of creative media is indeed in the hands of everyone.

If you’d like to learn more about Digital Storytelling, sign up by 30 May for a free course with the University of Birmingham, BBC Academy and Creative Skillset to access a wealth of tips and resources: https://www.futurelearn.com/courses/digital-storytelling

Error: Twitter did not respond. Please wait a few minutes and refresh this page.